Please take this opportunity to meet our dedicated staff of directors.

Brady started as Director of Bands at Waverly High School in 2008.   He directs the Marching Band, Varsity Band, Freshman Band, HS Jazz Band, Pep Bands, and assists with 6th Grade and 5th Grade Bands.  Mr. Rohlfs grew up on a farm outside Unadilla, Nebraska, and graduated from Syracuse High School.  He attended Midland Lutheran College in Fremont for his Bachelors Degree. After attending the University of Nebraska – Lincoln he earned his Master’s Degree in Music Education in 2003.  In 2010 he finished the Administrative Certification Program through the University of Nebraska – Lincoln.  Previous teaching assignments have been in Sterling, NE, Ashland, NE,  Syracuse, NE, and Lincoln Northeast High School.   In 2004 Mr. Rohlfs was awarded the Jack R. Snider Young Band Director Award.  In 2009 he was awarded the Freda Drath Battey Distinguished Educator Award given out annually to one secondary educator in the state of Nebraska.  In 2009, he was inducted into Phi Beta Mu National honor band directory fraternity.  In 2017 Rohlfs was awarded the Golden Apple Award by KOLN of Lincoln. Mr. Rohlfs has been nominated to Who’s Who in American Professionals every year since 1998.   He is a member of the Nebraska State Bandmaster’s Association where he serves as Awards Chair on the Executive Board, as well as member the Nebraska Music Educators Association and Music Educators National Conference. In addition to working with his instrumental students he enjoys conducting clinics and adjudicating throughout Nebraska, Kansas, and Iowa, as well as coaching track at the high school.  Mr. Rohlfs is also a piano tuner and technician and volunteers as an EMT.  He has three children; Alexis, Ethan, and London.  His hobbies include playing volleyball and automotive and tractor restoration. 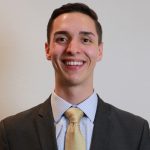 Jake Senff is the Band Director at Waverly Middle School and Assistant Marching Band Director at Waverly High School. Mr. Senff teaches 5th, 6th, 7th, and 8th grade bands. He was the Outstanding Graduate in Music Education for his Bachelor of Music in Music Education from the University of Nebraska at Omaha. Prior to living in Omaha, Mr. Senff graduated from Shelton High School in central Nebraska. He has performed in the World Youth Wind Orchestra Project in Schladming, Austria, for two consecutive years as well as an international choral tour in Lithuania. Mr. Senff has a passion for conducting and regularly attends conducting symposia. In his free time, he enjoys playing volleyball and traveling with his partner, Ryan.

Emily Standage is a saxophone and clarinet player who graduated from Waverly School District 145. She received her Bachelor of Music, K-12 Certification from the University of Nebraska at Omaha in 2016. During her time at UNO, she was able to perform with world-class musicians and travel to Europe and Asia with different performing groups. She completed her student teaching experience with Blair Community Schools during the spring of 2016, and is currently a member of the National Association for Music Education. Emily is a dedicated advocate for music education, and believes that students become more creative, imaginative, confident, and emotionally developed through studying music.

Please check back for new announcements!

There are no upcoming events at this time.

Band Booster meetings will be the 3rd Monday of each month unless otherwise posted and begin at 6:30 p.m. via Zoom or when possible in the H.S. Library/Conference Room.

If you would like to receive more information about our band programs, the directors, or even just to volunteer, please don't hestitate to contact us.

There are no upcoming events at this time.